Every year when the holiday season is approaching, we already know where we’re going.

We book accommodations well in advance because when you’re travelling with three kids, grandma and grandpa – that bears an uncanny resemblance to The Great Migration of the Serbs.

Year after year, my husband and I agree beforehand not to travel at night, and every time we somewhat naturally forget that before we hit the road. Instead, we grant ourselves that marvelous experience of overnight journey because, certainly, at that time the kids are asleep, they don’t make mess, there’s no vomiting, they’re not hungry, nor do they have to pee at every gas station, or whine for ice-cream; all the while some Turkish gentlemen – worrisomely embalmed and scorched from the road – refresh their bodies by splashing bottled water in front of their cars, whereas I’m making a strenuous effort to stop the youngest kiddo – who’s screaming bloody murder – from sprawling her body length over the puddles.

Oh no, there’s nothing like that when you travel at night… There is, however, torture; mental self-abuse when you drive and constantly threaten and warn yourself that you are driving children while you feel extremely sleepy.

What’s more, there are other traffic participants who share the same plights at night, so it’s not uncommon for you to frenetically blast the horn to wake them up when you see that they are turning into your lane. So, obviously, you wake up all your children – the baby cries from Vranje to the first (out of hundred) toll ramp in Macedonia, at which point I dejectedly decide to move to the backseat and have my baby nestled in my lap until she falls asleep. My husband has totally awakened due to the adrenalin rush and is very much eager to argue because I decided to move to the back and take the baby out of an infant-car-seat. I put myself and our baby in danger by doing so, and he would really love it if we got pulled over at 2 am by a Macedonian police officer and paid €1,000 for such flabbergasted-ness.

He calmed down shortly after, i.e. until his mom told him – at one of the gas stations in Macedonia, where we had stopped to admire the still-in-existence squat toilets – that they used to make him a nice makeshift bed on the back seat when he was a kid and that he was just fine. Yeah, she really has a flair for saying the wrong thing at the wrong time. That is her special skill set – indestructible.

The kid’s screaming that she’s peed all over her legs while she peed on that weird toilet with a hole, when I just elegantly closed the rear doors under the excuse that she’ll wake up the baby, to bypass the situation. Splendid. We’ve arrived at the second finger of the peninsula where everyone spends their holiday, us included. I was proud that we didn’t get divorced on the way.

As far as holidays are concerned, we tried everything. From the thousand-star hotels to the less luxurious Greek ones, but when you travel with kids, there are no guarantees that you’ll find it better in a hotel with more stars. The most important thing is for them to have someone to keep them company. One way or the other, make sure to go on a holiday with someone who’s a lot like them, because you won’t have to entertain them, just to keep an eye on them not to get drowned or injured. This one time, the kids didn’t want to taste anything from the hotel, and we didn’t have a kitchen, so we resorted to robbing stores, buying anything you can chew on the beach bench because the taverns too were repulsive.

Similarly, we’ve tried to travel both with and without the grandparents. Again, no guarantees. That part is a true lottery. It depends eerily upon their constellation, and upon yours. From the get-go, you can forget that they’ll follow any instructions. Certainly, not yours.

It’s a lot different from the times when your own mother comes along, and you can wholeheartedly spill whatever is on your mind and argue appropriately, without having to hold back, or bite your tongue to avoid the wild lava spewing. And every time I would start to reason with her politely by putting on the velvet glove, my conscience would be threatening, lurking just around the corner, whispering so only I could hear, that one day looking back to those situations I would be sorry, so very sorry when she’s no longer with us. So often I wanted to cry out: “I DON’T CARE!’, “STOP IT!’, “I don’t freakin’ care that I’d regret it!’

Yesterday, I sat on the terrace and watched a woman with her mother and little children returning from the beach, saying: “Mom, I told you not to get involved! How is it any business of yours whether he puts sunscreen on his kid or not. Stop meddling!” The mom slouched around, carrying sand buckets and shovels, and plastic animals of all kinds speaking to herself mostly: “But I just wanted to rub the lotion myself, I didn’t mean to…”

I felt sorry for her, as well as my mother-in-law  –  so sorry in fact that I wanted to run after that woman and hide behind the first tree near her and whisper so that only she could hear me: “Oh, it doesn’t matter, honestly, I swear to you, they’ll forget about it in five minutes, just like I do!”

This year’s holiday plans are in the following order: we arrive at the camp that we chose last year where our friends had stayed when we visited them. The camp/commune comprises small wooden or prefabricated houses, a swimming pool, breathtaking naturally fenced beaches, and bikes for renting where kids ride kick scooters across the camp, and parents hang out on the terraces.  Marvelousness. 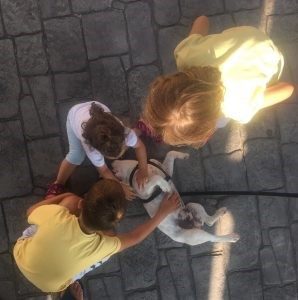 That moment when you find a dog on a holiday

Let’s try it. The memory of my mom on a holiday – whom I didn’t understand, whom I felt sorry for when she used to leave the beach first and come to the beach last, so that she would make lunch for us – kept popping up. I used to say that I would go on holidays with my kids to hotels, and that I would never cook on holidays, ever. And here I am, shopping for a spatula on the local Greek marketplace, because we are newbies to this kind of vacationing, and we didn’t bring any dishes.

How about that moment when you want to file for divorce online, instantly, right there on a holiday – does it ring a bell? That happened to me this year when I was looking for sour milk for the baby which I couldn’t find anywhere. I asked my husband where he had put it because it had been him who arranged the groceries the day before, after a humongous grocery shopping for a lot of people. He opened the trunk saying: “I took out all the bags yesterday,” to which I asked: “and from the back seat?” He looked at me puzzled – “how come there were bags in the back seat?” Well, at that moment you realize that sour milk, fruit yoghurts, cheeses, frozen vegetables, and chicken drumsticks had been lying in the back seat throughout the night and the following day, melting in the sun. The only thing left for you to do, to protect your children from witnessing domestic violence where you poke your husband’s eye out until his dying breath – is to divorce him immediately! Online subscribe! Divorce. Name and Surname. Submit! “Urgent”. And get away. As far away as possible so you didn’t have to watch him take those bags out of the car.

I spot my middle daughter approaching our accommodation, Nutella smeared all over her face. I look at her. She smells like pancakes. “Where did you get the pancakes?” – “My grandma made them!” Sure, my mother-in-law had brought a pancake pan, fed the kids expediently and inconspicuously, while I chased after a saucepan in local stores. Then a few days later, my son was nibbling Smoki! How come they had Smoki in Greece?! The Serbian Smoki nonetheless? It turned out a friend from the beach gave him – people had brought a nice suitcase from Serbia full of tasty snacks that children loved, while I read labels in Greek hieroglyphics to parse out what was sweet, and what was salty because the day before we’d bought the caramel potato chips!

I opened my notebook and started writing down:

So, I cooked, peas. I’d found an amazing butchery shop nearby! I was overjoyed, as if I glared at the guesthouse desserts after dinner in Alanya.

The kids – starved – ate the peas without any objections! We fed two of our neighbors’ children whose mom immediately said that they would eat at their place the following day!

Now this is heaven! My husband’s looking at the pan in the middle of the table, salads, plates served on a bed sheet on the terrace because, unsurprisingly, I forgot the tablecloth. He said: “Man, you worked really hard, you left the beach at 11 am. I’ll go be with the baby afterwards and you go for a swim.” Biting my tongue, I said: “Ok.”

I bought a new swimsuit while in pursuit of pans, I put peas to cook while the baby was sleeping. I was sipping coffee on the porch and read half the book that I had been carrying for five years on vacations to hundred-star hotels.

Mom, I’m sorry that all those years on holidays I felt sorry for you! I’m terrriblyyy sorry! Well, life is beautiful, simple, bare naked, messy and wild in the oasis of children’s screams, laughs, and smoke from the barbecue on our summer vacation!

P.S. If only the sunscreen manufacturers would add some anti-mosquito ingredients – there’d be no end in sight to my happiness! They’re sucking blood nonstop! It’s not like when we were little and we knew that the sun bites in the daytime, and mosquitos bite at nighttime! I’ve got to go rub.